I’m very pleased that Valkyrjan IV was selected by the jury for inclusion in Jon Schindehette‘s upcoming Inspiration book project. It’s very exciting for me as the jury was composed of some of the top artists and art directors working in fantasy and science fiction publishing today – not to mention that the challenge submissions were filled with wonderful and strong work from all quarters! I’m somewhat surprised to find myself in such company.  I always imagine that my personal art sensibilities are a bit arcane and old-fashioned.

It’s a nice validation of the piece, I think – one that I’ve laboured over for years, trying to find the right way in. I had an idea for a darker, more “historical” treatment of a valkyrie about four years ago, and my first attempt was with ArtRage and a Wacom tablet in January 2010. Soon after that, I started using an iPad for my painting  (which I much preferred). I came up with an improved version that I was happy with at the time, but I eventually felt dissatisfied again.

The idea stayed on the back burner until Northern Light Workshop 2, where I decided to take some digital sketches and try to execute the final in acrylic on paper. I think it worked out pretty well considering how rusty I felt with analog painting, and both the instructors and my fellow classmates were very encouraging to me about the picture. Still: not satisfied.

I’d recently had a fun photo reference shoot with Elin Hökby, so I asked if she’d help me get this valkyrie sorted once and for all, and we ended up with some great material. John Jude Palencar’s Rag and Bone piece gave me some new ideas, and I decided to combine it all and go for version IV. The final process is detailed here, but wow – what a long road to get a piece realized! Below is a capsule history graphic showing the key development stages (along with some side diversions): 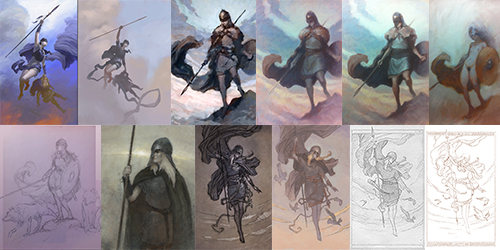 A “short” history of Valkyrjan IV.

I’m really pleased that it all seemed to pay off in the end, even if I sometimes felt like a dog that would not let go of a chewed-on shoe! I also enjoy seeing how my work has changed in almost four years (or not changed in some cases). For instance, here is the original treatment of the valkyrie’s chain hauberk from four years ago, compared to how I handled the same item today:

Back then, I was slavishly trying to render every detail, thinking that this would be impressive in and of itself (sometimes it can!). Four years on, I’m letting line suggest the outer form and just giving vague hints about the surface of the garment. I don’t know if one approach is necessarily better than the other, but I feel the way I am working now gives me much stronger results. Happily, the judges of the challenge felt the same way!

Thanks again to Jon, Irene Gallo, Lauren Panepinto, Julie Bell, Terryl Whitlatch, Terese Nielsen, and Rebecca Guay for their votes of confidence in my work – it means more than I can properly express.

"When you feel like putting something into your picture or do not know what is the matter with it, take something out."